There is no all compromise to be finished, ho bashi nuts born in Omuta.

Excellent supporting role enhancing taste of dishes provided in trip train "THE RAIL KITCHEN CHIKUGO" tasting area is cultivated peanut in Omuta-shi. If we bring about texture rhythmical crisply if we cut small and attach to vegetables and salad and do sauce which we pasted carefully for people to meat, fragrant flavor and heavy body spread to fill the mouth.
On autumn one day when harvest of such peanuts began, we visited Tomishige farm of producer.

Tomishige who returned home in Omuta-shi two years ago, and began agriculture. It is personality that is craze for study feeling to pursue taste of peanut which oneself can understand thoroughly.

Area where agriculture is carried out flourishingly in Miike reclaimed land overlooking east bank of Ariake Sea, Mt. Miike. In field of Tomishige in reclaimed land of Showabiraki, Omuta-shi, potato or taro are cultivated mainly on peanut.
Because "we will begin gain next week." This visit that was decided with such a telephone of Tomishige in a hurry. In fact, moisture is powerful enemy for peanut. We aim on day expected that fine weather continues for a long time while confirming maturity condition and weather forecast of beans in turn and we wait until timing and seem to start crop. "Beans cannot cook white yet last week. This week and fine weather continues timing when today is the best"
Gain is performed using machine and human hand carefully. At first, we dig up peanut which grew heavily in the underground while upsetting soil of field by machine after having harvested leaf of peanut. Afterwards, it piles up and does and further dries in the sun if we open peanut by hand on the field and dry for approximately one week until peanut becomes dry.

Peanut is dug up from soil in sequence when we stir soil by tractor.

Peanut which we dug upsets by stock by hand and just dries.

"Straight beans which pick that we think that dried peanut is good, but I am the most delicious, and have just finished. This, meal betemirandesuka. It is still white peanut with soil that we were handed. Amorous beans tinged with pink appear slightly when we divide into two. Oh? Is it eaten raw? Crunchy resistance to the teeth and sweetness that is fresh and young, and is slightly kind spread when we put this in the mouth in spite of being surprise. Another thing real with peanut that we have tasted the taste so far. "This it was produced and had salt of length to boil and told that it was saying we do to pick up whether it was the first horse that did of beer" while letting face come unsawn. It is difficult to ship parallel to crop work as straight beans having just finished being produced do not do storable duration, and straight peanut seems to be special reward that only producer was given. It is recommendation of Tomishige that we boil straight beans having just finished being produced with 3% of salt solutions for about 40 minutes, and do in "steamed beans".

It is own convincible method if we make

It is two years ago that Tomishige began the making of peanut in earnest. Tomishige done work engaged in agriculture came back to Omuta-shi of hometown triggered by retirement at the age limit after an interval of about 40 years and succeeded field of the parents' house in place of old mother till then. Well, at first, it seemed to be peanut that hit when it intended to make what. "kiyattakenne which peanut likes from the old days. When if do agriculture, cannot exclude this; omoi ttottandesuyo. Days to explore cultivation method of peanut this and that continue while making the most of knowledge of agriculture that we cultivated by past work if it is sure that it is so.
At first, it is made with soil. As soil of field is adding fertile soil that progressed from mountain, and quality of clay is strong, we are never tense with ticktacks, and it cannot be said that it is most suitable for peanut. Therefore we cultivate green manure crop before planting peanut and we make soil that there is much nourishment that we turn that over and are crowded and did light and comprise in semination.
When "it is Chiba hit with many production centers of peanut, we plant seeds in around May, but temperature becomes rainy in crop highly when we do in the same way. Therefore we move semination behind daringly for one month and take. It is said that as crop coordinates so that it is late fall when temperature lowers, worry of mold with rain decreases. "That and the other. Are methods of drying different, too?. After opening peanut on the ground in Kanto, and having dried for approximately one week, we dry by "goods in open air storage" (botchi) to pile up to height of adult more and method to be said, but are done to mold immediately in humid Omuta. Method that what we hit there on makes shelf such as low desk with legs and piles up on the top, and to dry. We make space between the ground and peanuts and draw air. 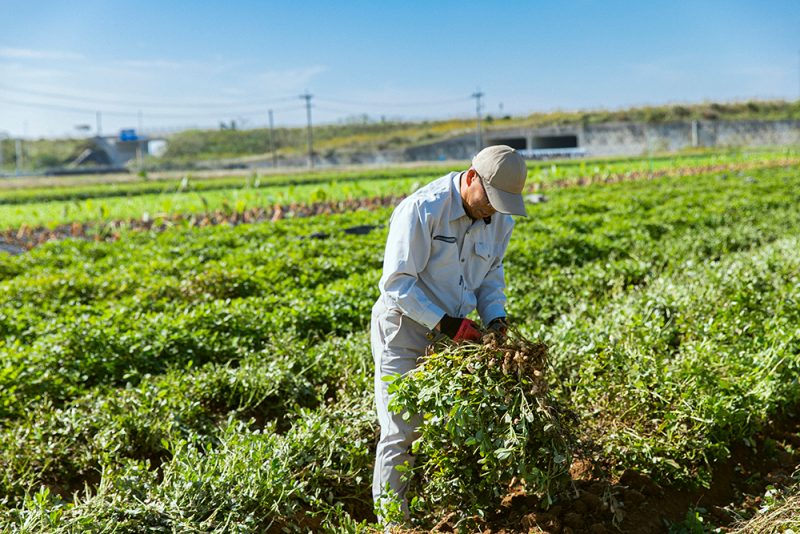 Until, after the crop, peanut dries; rain is powerful enemy. Pray that we do not have large rain; it is said every day. On rainy day, cover protects peanut with blue sheet.

While it is blown under the wintry sky by autumn wind, taste adds to dried peanut more and more well, and taste condenses. We thresh in the beginning of December, and shipment finally begins cleaning at the end of the year if we sort and we dry once again and shut in taste well.
"Most are not jealous of manual labor and there is labor, too and takes trouble, too. But it is comfort shikadesune very much that it is not changed to be pleased, and make that, after all, we make peanut of favorite by oneself and are eaten deliciously and can sell. Besides, we have it is right cooked scenic train, and everybody enjoy now. As for Nishitetsu train, train with contemplation carried every day from Omuta to Tenjin for the cramming school era is not burnt. We want to get on scenic train sometime.
Peanut of this year when love of Tomishige was fully put is going to come out in the Omuta city and suburban roadside station for New Year holidays. 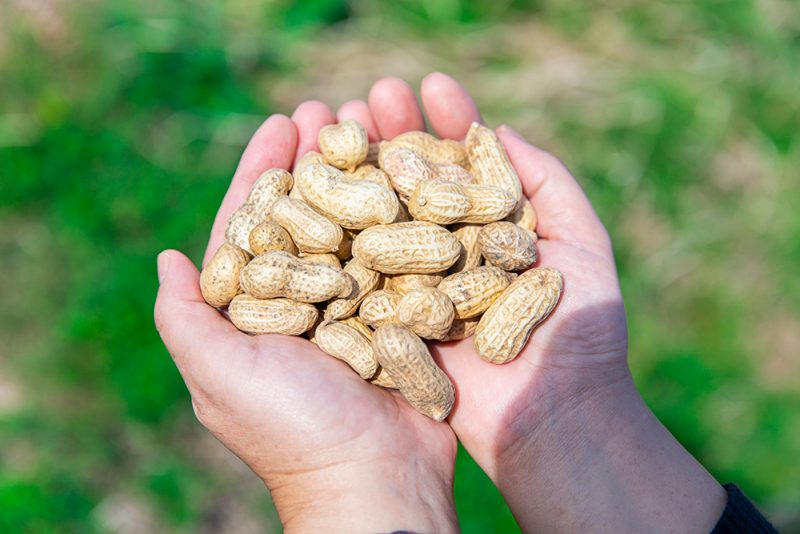 What cultivate at Tomishige farm "stands Chiba and a half"; peanut of toiu kind. Momentary fragrant flavor that fell below husk is appetizing and can enjoy mellow taste with light sound called "crunch" when we chew a mouthful. Ariake Sea which spreads when 1km exceeds former dike from Tomishige farm. It becomes place of healing of Tomishige who finished work saying "the setting sun to see from here is not aglow highest".

Cultivation of peanut which is rare in Omuta-shi. Passion and challenge mind to "want to make delicious peanut" to "peanut liked, and was not burnt, making" and one one of the words of Tomishige who took the ease, and said so overflowed. If Tomishige who is craze for study feeling comes, agriculture of Omuta may become more and more interesting from now on. We cannot help feeling such wakuwaku.

We look for from keyword

We look for from area